Friday 28th March 2014 saw the culmination of Sharon Kivland’s highly successful Library Intervention at Leeds College of Art. The Blenheim Walk Gallery was the venue for a delightful evening of readings, installation, performance, film and games, each the outcome of her agents’ creative research within our library: their “Reports on knowledge”.

I am extremely grateful to Sharon and her agents who have also very kindly donated their reports to the Artists’ Book Collection.

Abbie Canning : Absolve me Sharon, quia peccavi
The kissing of the feet of […] slave masters, and the statues of slaves and gods has for thousands of years been practiced as a gesture of
submission, humility or petition. Hence, the foot symbolised freedom or slavery.

Confess your sins and discover if you are awarded freedom.

Alison J. Carr : The Enterprising Showgirl
A reading of extracts from a private circulation pamphlet printed circa 1950s, found in the British Library. The colourful, bawdy story tells us about the fantasies projected onto showgirls at the time; maybe they continue to be now. This may be considered in relation toThe Mucky Bits, an archive of photographs of the rude pictures taken from the library books in the collection.

Gin Dunscombe : Memento Mori
Her agency took the form of an enquiry, collecting information about costume, the occult, in memoriam poetry, trick photography, body snatching and grave robbing, the monopolistic role of the undertaker, and the abrupt volte face of the Christian church in its attitude to cremation.The outcome of her labours was presented to Dr Kivland as a sixty-eight-page leporello commonplace book. The essence of her observations was represented by her accompanying work, but for this occasion she read some Victorian In Memoriam and obituary poems, which allude to the working environment of the deceased craftsperson. 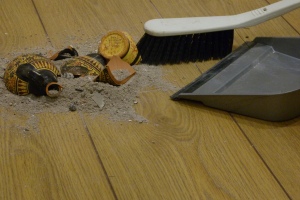 Bryan Eccleshall : Steam Trains and Scribbling
In which the agent reflected on various and diverse snippets of learning acquired while acting as an agent for another. Also, a reflection on the learning carried out for the other: two lists, two readings.

Helen Frank : Characteristics of Copy
A set of hand-drawn post cards, with a live drawing performed in Helen’s Frank’s absence by Rachel Smith. The drawing was postcard-sized and took two minutes.

Even the animals […] do not just stand idly in front of sensuous things as if these possessed intrinsic being, but, despairing of their reality, and completely assured of their nothingness, they fall to without ceremony and eat them up.

Chris Gibson : Convergences
A ten-minute reading. Convergences is a twenty-page book in two halves: the first half is a fictional journey through Leeds College of Art’s library which hinges on two texts, and the second is evidence of the actual process of reading that led to the work. The work is about the pleasure of reading as well as about the process of writing.

Lesley Guy : Rebel Rebel
Lesley Guy spent too much time looking at the V&A’s David Bowie catalogue in the library when she should have been researching for Sharon Kivland. There were so many beautiful pictures of outfits and amazing costumes all adding to the magical being of Bowie – she could not look away. She was sure she could have found something in there to add to her research, after all, she had promised something unexpected, but she was not giving this away – this feeling was hers. On her way home she listened to the music and knew she had to share this excitement with the other agents. She performed Rebel Rebel from Diamond Dogs.

Chris Green & Katheryn Owens : In which we attempt to recreate a walk previously undertaken, in seven minutes.
A short reading, a walk of the imagination, a walk …

Jane Harris : Speaking of the Gaze
The screening of a 3-minute film, in which the following often misunderstood quotation of Jacques Lacan is explored in a faintly absurd manner: 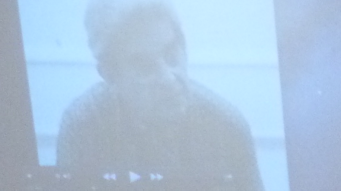 Jane Harris “Speaking of the Gaze”

Katya Robin : The Library Game, Dewey Decimal System 700–799, Arts & Recreation
A musing on breaks and lateral thinking: The Roll-and-move game used the Arts & Recreation section of the Dewey Decimal System for play. Game tiles represented a library class graphically and/or typographically. Mild peril is supplied by Wormhole tiles that lead to random alternative subjects. A demonstration of how to play a board game in a booklet, including 10-sided dice and companion text.

Rachel Smith : Process and Dialogue
A short reading of extracts from the artist book produced while acting as agent for Library Interventions: Sharon Kivland.

Sharon Kivland with Rachel Smith: the slave claimed her freedom

Holly Stevenson : Tear To Care
After working as an Agent, Holly Stevenson considered that when Jean-François Lyotard wrote ‘desire baffles knowledge and power’ he neatly summarised desire as baffle effect, an effect located in crystalline proportions in reflections made on the practices of wearing rouge and writing postcards.  To consider what a Library Intervention might be in terms of desire as baffle effect she has made an artist’s book that pursues intervention and intervener.  Holly performed a reading from part of her report.

Isabella Streffen : Something About The Girl
In her reading Isabella Streffen confessed what she knows about the disappearance of the female detective as a strategy in contemporary art. Isabella delivered her report via voicemail.

1. Take the first word in the text eg. The

2.Take the next word in the text beginning with the last letter of the first word, e.g.,‘e’ – end.

3. Take the next word in the text beginning with the last letter of the previous word, e.g. ‘d’ – door

4. Continue until the text is exhausted.

Lou Hazelwood & Jo Ray : Elliptical Research Survival Kit
The elliptical research space mapped their foray into the library to explore problems of recording and reporting. Establishing a methodology of sorts, models of ‘good’ practice were diligently drawn out and rebelled against.

Good intent to serve the master gave way to the satisfaction of the elliptical agent’s own whimsy, with serendipitous connections of dubious substance. Bespoke search devices, coding systems, and forms of sustenance were developed, all exploring the shape of research. The elliptical agent facilitated the use of these resources in a brief tour of the library and a tasting session. 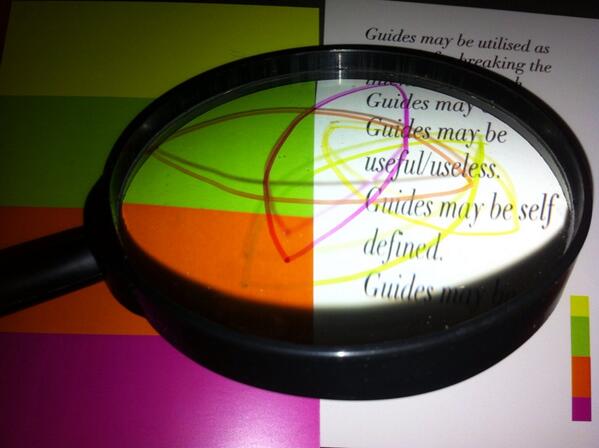 Joanna Geldard : Other Oscillations
A work that was seen during the tour. What is familiar is a solid axis, while only an impression, oscillating and existing within frozen frames simultaneously. 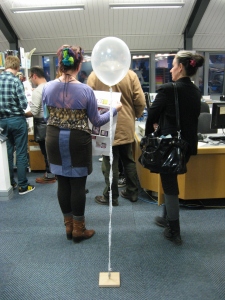 The images on the gallery walls are part of the current exhibition, “The KISS KISS KILL KILL Archive: The Graphic Art & Forgotten Spy Films of Cold War Europe”.

An archive of recent work

our evolving relationship with boats

THIS SITE IS NOW AN ARCHIVE. PLEASE SEE ERKEMBODE.WEEBLY.COM FOR NEW SITE

A conversation between contemporary artists and their influences across time.

Silt and shingle. Prose and poems by Brian Lewis